Are you looking for an alternative to collecting funko pops? Or maybe, you’ve come across Nendoroid figures and wanted to learn more about them. A common question that’s asked in the toy collector community is ‘Which is better, collecting a Funko Pop vs Nendoroid?’ Each type of figure has its strengths and weaknesses in design, quality, appeal, and cost. We wanted to provide an in-depth analysis of each. When asking around in the collector community, there’s always a passionate debate.
Have you experienced this tangle? Well, it’s time to have a discussion about these two.
We will address the similarities and differences between a Funko Pop vs Nendoroid. It will also let you know which one between the two is worth your while. At the end of it all, you will be able to appreciate both and know which one suits you best.
Let’s dig in!

What is the difference between Funko Pops and Nendoroid?

To determine the differences, we need to define the specific criteria first.

Let’s discuss in more detail a comparison between these specifics!

Pop figures made of polyvinyl chloride are mass-produced in factories. Each shipped to fans worldwide.

But, when it comes to Nendoroids, these chibi-style figures are handmade. Each hand-painted, making them unique. You will also notice Funko Pops come with black eyes., while Nendoroids have different eye colors.

Therefore, if you prefer to keep tweaking your display, you will find Nendoroids more appealing. On the flip side, Funko Pops’ parts are not removable neither are they interchangeable, meaning you cannot pose them or do much to change their display.

There is a consensus in the collector’s world that Nendoroids have better quality than Funko Pops. Moreover, it takes more time and skill to create a Nendoroid because they are crafted and painted by hand.

3. Appeal: Funkos Has Wider Range of Characters Due to License(S)

Funko Pops appeal to a broader fan base than Nendoroids, while Funko has Set featured image multiple licenses, allowing the company to produce new pops faster than Nendoroids. Therefore, there are more Funko Pop figures than Nendoroids appealing to a bigger audience. Nendoroids are particularly popular amongst anime fans.

4. Cost: Funkos Are Cheaper While Nendoroids Are More Expensive

Because of the nature of their production processes, Funko Pops are relatively cheaper than Nendoroids. For instance, Funko Pop figures retail for as low as 10 dollars, whereas to get a Nendoroid figure, you must part with at least 40 dollars. However, what makes Funko Pops more interesting is that they have exclusives whose value increases over time.

Similarities between Funko Pops and Nendoroids

Despite the glaring differences discussed in the previous section, Funko Pops and Nendoroids also have some similarities. For example, both companies add details related to the series or TV shows from where the figure is based.

For example, Nendoroid’s Iron Man Mark 45 attire has inspiration from the armor in 2015’s Avengers: Age of Ultron. Moreover, the figure comes with a unique display stand that resembles the setting of the ultimate battle in the movie. On the other hand, Funko Pop figure Space Jam Lebron Leap depicts the basketball star in full action, raring to go with the basketball in his hands.

Additionally, they both represent a particular fandom.

Another similarity is the size of the figures. The Funko Pop figures stand around 3.75 inches tall, while Nendoroids are around 4 inches tall.

Which is better: Funko Pop vs Nendoroid? 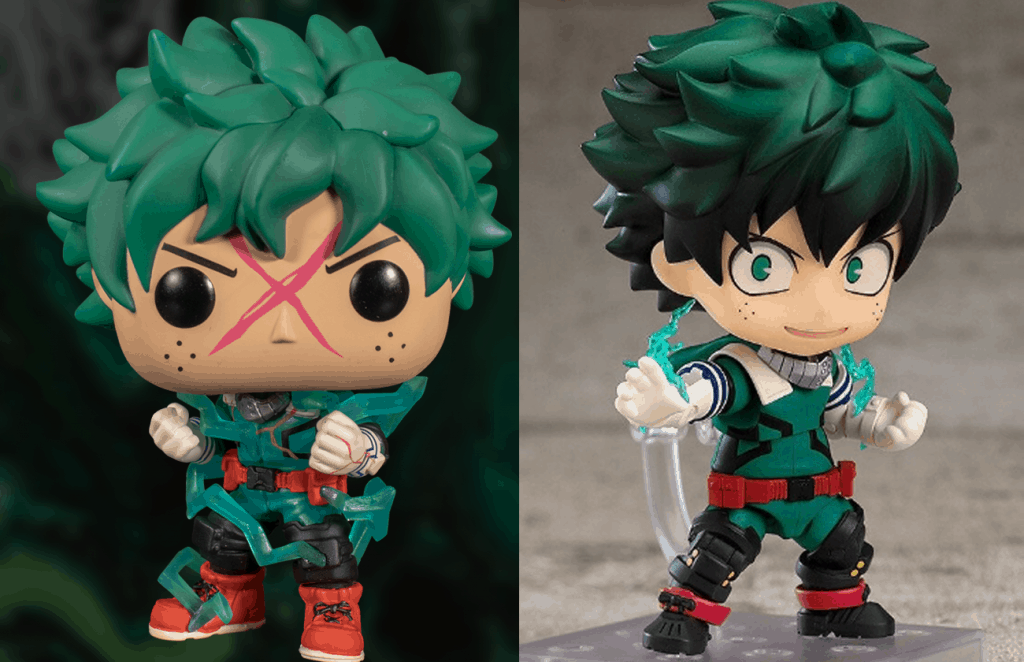 Funko Pops have a wider range of character selection, while Nendoroids have fewer characters with more accessories. Nendoriods have the ability to pose multiple different ways re-enacting different memorable scenes, while Funko pops heads and legs do not move.

While the real answer to this common question is subjective. If you are an anime fan, then you will definitely find Nendoroids more appealing. On the other hand, if you belong to other non-anime fandoms, you will prefer Funko Pops.

Why Funko Pops ARE better than Nendoroid

There are several reasons why Funko Pops are way better than Nendoroids. Here are the most important ones:

Based on this and many other reasons, whether one is better between a Funko Pop vs Nendoroid is the better collectible.

Also items to consider when comparing the pros vs cons of buying funko pops:

Is switching from Nendoroid to Funko Pops worth it?

It is worth it to switch from Nendoroid to Funko Pops:

Funko Pop vs Nendoroid, Both Are Worth Collecting

Which figures should you buy, Nendoroids or Funko Pops?  Are Nendoroids worth it?

Well, if you are an anime fan, you will find Nendoroids a better option. Moreover, they are of superior quality.

Are Funko Pops worth it?

Funko Pops seems to offer its collectors more than Nendoroids. If you want various figurines at an affordable price that could become more expensive in a few years, Funko Pops is your best bet.

Should You Boil Your Funko Pops?