Have you ever wondered if theirs a brain inside a funko pop head? Or how to remove a funko pop head in the first place? We’ve heard these questions many times and wanted to get to the bottom of what’s fact vs. not. The best part of collecting funko pops is admiring their different shaped heads and unique styled hair; it makes sense why rumors about funko pop heads having brains would start around them.

Do funko pops have brains in their heads?

Funko Pop’s do not have brains. Funko Pops have nothing inside their head except for more vinyl due to limited space and the different shapes the figure’s head can come in. Additionally, rumors of funko pop’s having brains started from popular app TikTok where videos showed.

If you hear something inside a funko pop head rattling around, it’s likely a broken piece of plastic that snapped off during the production process and not a brain. Don’t worry, a rattling funko pop head is not broken it’s just a manufacture error.

The trend of Funko Pop Head’s having brains started as a TikTok rumor, which quickly escalated and turned into a meme on the internet for trolls to take advantage of fellow collectors.

Dragon Ball Z fans felt that specific DBZ funko pops had a hidden glass dragon ball in them. While this would make for a neat surprise, sadly, it only results in collectors breaking their favorite DBZ pops heads wide open.

Do funko pop heads come off?

Funko Pop Heads only come off when a significant force or pressure is applied and is highly dependent on how the force is applied. The majority of collectors do not want to damage their pop, and it’s not normal for a funko pop to come sealed in a box with their heads lose or disconnected. Funko Pop Heads are not interchangeable; they are sealed to the original pop and are one piece of pop vinyl. Other funko pop bobbleheads have a spring between the head and body that keeps them together. They are not supposed to be swapped or switched with pop figures.

Additionally, are funko pop heads suppose to rattle? A pop’s head will only rattle if there’s a piece of vinyl broken within the head. It’s abnormal to hear a funko pop head rattling, both funko shot bobbleheads and pop vinyl figures. What’s the average size of a funko pop head?

A funko pop’s head will move if turned and force is applied; however, a brand new pop’s head before being added to their box gets tightened. Depending on how loose the figure’s head is, the more movement you’ll experience. Funko pop heads are not meant to move and are only supposed to face forward unless touched otherwise.

If you find a funko pop with a head not facing forward, know that it’s likely a mistake made in production, or someone had touched the funko pop before being added to its box.

Funko Pops, when dropped out of their box, can experience their pop heads to move. If this does occur, feel free to turn the head back to forward-facing.

How to Remove a Funko Pop’s Head

As fellow toy collectors ourselves, we do not recommend removing the funko pop’s head, however, it’s your toy, and you can do what you see fit with it.

If you’d like to remove the pop’s head, here are the tools and steps you’ll need to get the job done. Safety is our top priority; if you are a teenager or kid, please have an adult assist you.

Use caution when removing a funko pop head because they are not meant to be removed in the first place. If you’d like to put food inside the head of a funko, there’s plenty of examples of using Sushi or Candy online.

We are only scratching the surface when it comes to answering questions around funko pop heads on the internet. 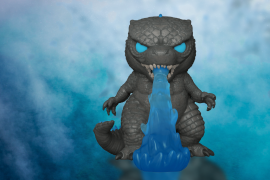