What’s the best vaulted black light funko pop? Our blacklight funko list breaks down which figures are in high demand and worth adding to your collection.

While blacklight pop figures aren’t new to the collecting community, they’ve been introducing newer characters. However, what happens to those that they’ve already released? Those have become vaulted and won’t be available anymore. To understand which vaulted black light figures are worth every penny, we need to explain what makes blacklight pops differently.

Like glow-in-the-dark funko pops, vaulted black light funko pops can glow when using a ‘blacklight.’ Every collector is talking about this pop series because it enhances and adds to their collection since the box is different colors than your standard white color.

Have you seen the exclusive NFT funko pop boxes? They are black and outlined nicely, similar to how the blacklight boxes look as well. It’s because this new color box makes them stand out.

Also, batman boxes are usually black, and they’ve been inspired by those as well.

9 BEST VAULTED BLACK LIGHT FUNKO POPS YOU MUST HAVE

We wanted to share a list of the best-vaulted blacklight funko pops on the market with you. “I almost broke a sweat on that one.” – Logan, Wolverine.

Logan is a popular character in the Marvel universe with a superpower of having bone claws and extreme abilities similar to animals. In the comic, his height was 5’3, with a weight of 300 lbs. This figure perfectly captures the original x-men suite.

Yellow in blacklight material makes for a stunning glow that most pops won’t have, simply due to the majority of the character not being covered in that color. “Who are you calling Spider-Man!? We are Venom!” – Venom.

Venom or Eddie Brock is well-known in the marvel comics community. His ability to paralyze his opponents from his venomous bite makes fans go crazy for his funko pop. Eddie’s backstory also contributes to his popularity.

The figure provides excellent details of the separation anxiety and having his entire body taken over by Venom. Deadpool is a hilarious character that enjoys entertaining us by breaking the 4th wall on numerous occasions. Similar to the 7-eleven exclusive Deadpool pop, this is a highly sought-after figure. His powers come from Weapon X and the challenges he faced during childhood.

If you like the color red, you’ll get excited to see this blacklight glow red since most of his body is in that color. Not only is this a blacklight pop which already pumps the price up because of its rarity, but this ghost rider pop figure’s size is also 3 3/4′ inches and a funko pop shop exclusive.

Pricings for this ghost rider pop range average $170 to $200 and are considered a holy grail in the community. Tony Stark or Iron Man continues to be a fan favorite within the community. He’s the most intelligent person in the room and a true inventor at heart, especially since his heart was of metal. Harley Quinn turns from psychologist to Joker’s girlfriend and later becomes a feared boss in the underworld. Birds of Prey features Harley in a realistic look at how she makes that transition happen.

Harley’s wearing her classic suit in this pop; however, most are familiar with seeing her in a dress from the newest suicide squad movie.

Have you found the Harley Quinn diamond pop at retailers yet? It’s a fan favorite that you can not miss. “Leave the demon to his demons. Rest your own soul.”

A holy grail funko pop if you can get your hands on it because this show’s been around for a long time. It hits on the nostalgia that comes from watching it when folks were younger. Steve Rogers, or Captain America, started in the army and quickly learned about his talents with a shield. Using a shield for both defense and attack proved to work well for him. Not to mention his leadership skills and the impact he can make in the marvel universe.

Funko collectors enjoy the detail on his shield and the glow since it takes up such a large area of the pop. The average price for a Captain America black light ranges from $35 to $45. Thor is a war god that can take any paint due to his enormous strength. Additionally, his hammer provides powerful attacks on his opponents and the environment around him.

The collector community can’t get enough of the glow from his helmet as it reminds them of the scenes in the movies, especially for folks whose favorite color is blue.

Upcoming Vaulted Black Light Funko Pops Will Be On The Way

Black Light Funko Pops continue to grow in popularity, and the vaulted pops can range from $45 to $200 if sold online. As prices for these highly-desired pops increase, you’ll want to grab them before it’s too high to get in.

Sometimes funko retailers provide restocks on blacklight pops; however, these are vaulted, and you won’t see the items listed restocked.

If you’ve enjoyed reading this article, consider finding other pops you should add to your collection from these popular vaulted lists: 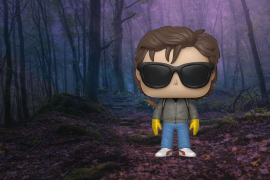